How I Managed to Stop Using Heroin

Quitting heroin was the hardest thing that I have ever done. I tried to stop using dozens of times throughout my eight years of drug addiction, only to fail and wind up back on the drugs.

I tried everything from detox centers to hypnosis when it came to getting off heroin.

With so much experience failing, I had a pretty good handle on what to expect when it came to quitting.

I knew that there were three phases I needed to account for; detox, treatment, and aftercare.

So, I put together a plan for myself that I thought would give me the greatest chance of success; and it worked.

This article is not meant as a recommendation. It is simply the story of what I did to stop using heroin. Always consult a doctor before you quit using drugs.

I always dreaded detoxing. That first week after quitting heroin is brutal.

Withdrawal symptoms and temptation were the two factors I needed to overcome to make it out of the detox phase.

Trying to quit cold turkey never worked for me. I would always get overwhelmed by the painful withdrawal symptoms and wind up calling someone to get me more drugs.

I decided that a detox center was my best bet. The nice thing about detox centers is that they take your cell phone, which helps remove that temptation to call your dealer and get more drugs.

I still had to account for the withdrawal symptoms I would inevitably feel when I stopped using. I had tried Suboxone in the past for withdrawals and found that it helped ease my symptoms.

After doing some research, I was able to find a detox center in my area that used Suboxone to help patients detox.

I checked in on a Monday, and by Tuesday night, I was in some serious pain. The withdrawal symptoms were starting to get unbearable. My mind raced as it tried to come up with ways to take away the pain.

I made a plan to leave detox and take the bus to my dealer's house. Just as I was about to leave, a nurse came into my room and told me it was time to take medication.

She gave me a Suboxone pill, and I placed it under my tongue. Within minutes my heart rate slowed, and I became calm. The painful symptoms I was experiencing began to ease, and I was comfortable enough to fall asleep.

Suboxone got me through the worst of my withdrawal symptoms, and I was able to stay the full ten days.

After that, it was time for step two of my plan; treatment.

There were times when I went back home straight from detox. This decision always ended in disaster, as I would immediately relapse.

Five to ten days in a detox center just wasn't enough time. The temptation to get high was still too powerful even after the drugs had left my system.

I needed to go somewhere where I could take a break and gather myself before going back into the real world. Rehab centers are the perfect place for that.

I've gone to several rehabs in my life. I always liked rehab because it provided me with a safe place where I could try to get some recovery before I went back out into the real world.

There are different types of treatment centers.

I went to one where we lived in sober houses and had a van shuttle us to a group every day. Others are more closed where you cannot leave the facility.

I decided to go with a closed facility, specifically a hospital setting.

I arrived at the treatment center immediately after my ten days of detox. The first few days of rehab are always a little uncomfortable.

I felt like the new kid at school, but after a while, I settled in. I still dealt with the temptation to leave during my stay at the facility.

I focused on the counseling sessions and was able to make it through day by day. Towards the end of my stay, I was feeling good about my chances of staying clean.

I knew that I still had a lot of work ahead of me.

This wasn't the first time I made it through a full rehab stint. My usual MO was to finish treatment and then relapse a couple of days after leaving.

I was sick of this pattern and determined to make a change. Instead of going straight home after treatment, I would move to a new city.

I figured that going somewhere I didn't know anybody would give me the best chance of success.

So, I moved two counties over from my house in Seattle to a city I had never been to before.

Once I settled into my new apartment, I arranged for outpatient treatment. I would take a bus to the treatment center for the group three days a week.

These groups helped to keep me accountable. The more I worked on my recovery, the stronger I felt.

Before I knew it, six months had gone by, and I was still clean. Moving away from Seattle turned out to be just what I needed.

After so many failed attempts to quit heroin, I started to lose hope. Thankfully, I found a way that worked for me, and I was finally able to stop using.

It has been 46 months since I walked into that detox center. I still go to outpatient once a month and receive one on one counseling.

If you are battling drug addiction and feel like quitting is impossible, don't give up. Take what you have learned through your failed attempts and come up with a plan that gives you the best chance for success.

If I was able to quit, anybody can.

Narcotics Anonymous 12 step program has helped thousands of addicts around the world. 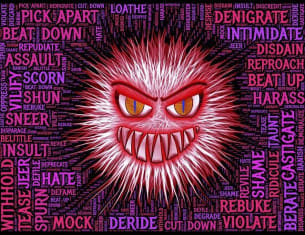 Drugs turn us into completely different people. Are those people always mean?